SOUTH PARK IS GOING DOWN TO DENVER FOR THE BRONCOS GAME

SOUTH PARK IS GOING DOWN TO DENVER FOR THE BRONCOS GAME

Posted on October 28, 2020 by National Sports Forum | Selling It | SUBSCRIBE

“South Park Is Going Down To Denver For The Broncos Game”

Some Friendly Faces Are Cheering For The Denver Broncos! 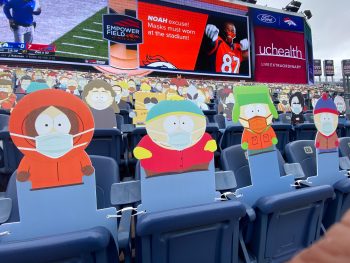 The Dodgers are World Series Champions! As a Southern California native, it’s been a great month of sports in my household. The Lakers, Dodgers, and hopefully a Rams title coming in February! LA celebrates with you Kobe.

On this edition of the Selling It feature, we take you through South Park and the Denver Broncos’ creative idea for giving back to charity. Read more to see how this huge promotion event went down. Enjoy!

“South Park Is Going Down To Denver For The Broncos Game”

NFL football is back and in full swing! Well, sort of. Our weekends have begun being spent on the couch watching our favorite NFL teams and players once again. The only difference is this year, they’re scoring touchdowns in mostly empty stadiums. It should come as no surprise that NFL teams have had to make some changes to their usual game day experience due to the Coronavirus pandemic. On September 27th, the Denver Broncos, Comedy Central, and South Park Studios teamed up to fill the entire south end zone section at Empower Field with cardboard cutouts of every character in South Park – 1,800 in total! While many other teams have incorporated cardboard cutouts of their fans or players, this initiative added a personal and creative twist. Cartman, Kenny, and all of your favorite friends from South Park could be seen enjoying the big game against the Buccaneers while wearing masks and following the strict social distancing protocols at Empower Field. The massive amount of media attention that this initiative received during the game against the Buccaneers made it a huge success for the Denver Broncos, Comedy Central, and South Park Studios.

This year has been full of adversity for everyone in the world of sports and beyond. According to Ted Santiago, Senior Director of Marketing for the Broncos, “The majority of [their] charitable events have been canceled or modified due to the pandemic.” The struggle to raise money for their charity partners while stadiums are empty opened the door for a unique opportunity, and the Broncos took advantage of it. Teams and leagues all over the world of sports have been using cardboard cutouts of their fans to fill the stadiums, but the Broncos took it a step further. The Denver Broncos were able to add their own twist to the already popular cardboard cutout trend, while simultaneously raising money for the Denver Broncos Charities! South Park Studios and Comedy Central made a large donation to the Broncos’ charity arm to promote the South Park Pandemic Special that aired just three days after the game against the Buccaneers. This hour-long episode of the hit animated comedy show was a smashing success and drew over 2 million viewers!

South Park Studios and Comedy Central made a generous donation to the Broncos charity arm thanks to this initiative. The event on September 27th, 2020 received a flurry of media attention. A video of the initiative received over 300,000 views on the Broncos TikTok and nearly 2 million views on the team’s Twitter. Additionally, it was nearly impossible to listen to a recap of the game against the Buccaneers without hearing about the South Park cutouts.

The Denver Broncos, Comedy Central, and South Park Studios were all very impressed by the success of the experience. Fans can expect to see the town of South Park filling up the 200 section of Empower Field for at least the foreseeable future as Cartman and friends are the newest Broncos’ season ticket holders!

The National Sports Forum is the largest annual cross-gathering of the top team sports marketing, sales, promotions, and event entertainment executives from throughout the broad spectrum of teams and leagues in North America. Visit www.sports-forum.com for more information.

Founded in 1999, Advent Creates Experiences That Move People®. The Nashville-based firm partners with collegiate athletic programs, professional sports teams, universities and more, offering an array of creative services from consulting to design/build to digital experiences. Advent’s collaborative process focuses on design thinking, co-creating with clients and innovative problem solving which empowers partners to engage audiences through experiential moments and storytelling spaces. Advent has delivered more than 2,000 projects including The Star in Frisco – Dallas Cowboys World Headquarters, The University of Texas Athletics Hall of Fame and the Stanford Home of Champions. Learn more at www.adventmovespeople.com.