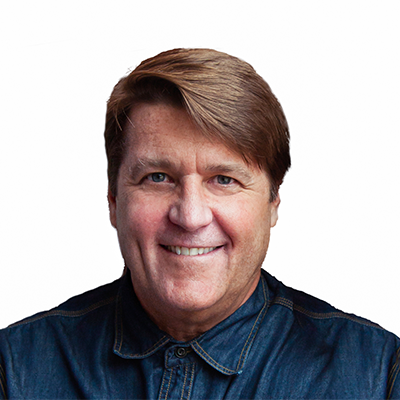 He rejoins The Coca-Cola Company after serving as President of the advertising, digital, and media agency MullenLowe in Boston.

During his time in Boston, Geoff spent nearly nine years as the General Manager and Chief Marketing Officer at Converse (Nike Inc.), where he and his team led the brand during a period of unprecedented growth, resulting in the Chuck Taylor All Star becoming the #1 selling sneaker in the world. Geoff also spent three years at Starbucks, as Vice President ~ Product Development & Marketing for Starbucks Entertainment. Geoff also spent the first 11 years of his career working in various sales and marketing roles at Procter & Gamble.

Geoff draws from his experiences at Converse, Starbucks, P&G, and MullenLowe to share strategies on creativity and branding with audiences around the world. A champion in disruption, Geoff is known for challenging the industry standard in an effort to promote boundaryless creativity in a meaningful and authentic way that transcends generations.

This is Geoff’s second term with Coca-Cola. He worked for the company from 1996 to 2005 and was Group Director, Worldwide, Entertainment Marketing.

Outside of the office, Geoff has an ardent love of music.  Geoff credits this passion with “jumpstarting” his career at Coca-Cola.  At the age of 13, he sold fountain Cokes at Tampa Stadium so he could see rock concerts.  For the past ten years, Geoff has served as a member of the Grammy Foundation, including the role of Chair.  He also serves as an advisor to a number of music related start-ups.

A proud Florida State University alumn, Geoff has dedicated dozens of hours to collegiate service and development at colleges and universities, including Harvard Business School, Yale Center for Customer Insights, Babson College, & Boston College.  He currently serves on the Board of the College Football Hall of Fame in Atlanta.  Geoff and his wife, Allie reside in Atlanta. They have two grown daughters; Abby, a budding advertising executive, and Claire, an established musician with more than 101 million Spotify streams, who is currently on tour with Khalid.

We are less than 30 DAYS away from the NSF Virtual Winter Summit!

Browse through our Agenda Brochure to learn more about the Virtual Winter Summit's 3 super panels, numerous breakout sessions and workshops, our all-star lineup of speakers, our full two-day agenda, attendee/exhibitor pricing, and even more! #nsfwintersummit

The National Sports Forum is with Carolina Panthers and 3 others.

We're excited to announce our second Super Panel, "From The Top Down – What’s In Store For The Sports Industry As We Dive Into 2021?", coming up at the NSF Winter Summit! Tune in as these industry leaders discuss their perspectives from the top of each of their organizations as we begin 2021. #NSFWinterSummit

For more information on the event or to register for the NSF Winter Summit, please visit www.sports-forum.com ... See MoreSee Less

LAST CHANCE: Today is your last chance to buy a badge to the NSF Winter Summit for only $49. Take advantage of this deal and connect with leaders from across the sports industry while also tuning into educational sessions lead by an incredible array of speakers. For more information on the event or to register, please visit: www.sports-forum.com.
#nsfwintersummit #sportsindustry #networking

*If you are interested in speaking at the NSF Winter Summit, speaker applications close TODAY. To apply to speak, please visit: bit.ly/3sqI8Rk ... See MoreSee Less

Great article & interview highlighting @csingleton__2, the winner of the NSF's 2020 OM Foundation award, and his incredible work with the @ChasRiverDogs and their community outreach program.

Come join us this Thursday @ 4pm PST for an open conversation with NSF Founder, @ronseaver & our former VP of Biz Dev, @TheJoshKeiles!!

Bring all the hard questions you’ve always wanted to ask!!

On this edition of the Selling It feature, we take you through (just some of!) the exciting and interesting parts of the Virtual Winter Summit. Enjoy!

The NSF would like to thank @epifanycx, our online survey provider throughout the Summit Series. For those who were able to attend the Winter Summit, we would greatly appreciate a few minutes of your time to help us fill out our post Summit survey at https://bit.ly/3pBhzGu

We hope all of you that had a chance to attend last week's NSF Winter Summit had a great time! We want to hear from you- if you attended our Virtual Winter Summit, we would appreciate a few minutes of your time to help us fill out our post Summit survey at https://bit.ly/3pBhzGu