Posted on January 10, 2018 by National Sports Forum | Selling It | SUBSCRIBE

Dear Faithful Readers,
Believe it or not, the 2018 National Sports Forum starts exactly a month from tomorrow! We are very excited to bring the 2018 NSF to Frisco and we’re looking forward to another great year of sharing ideas and best practices as well as discussing the latest sports industry trends with our Forum Family (and if you haven’t registered already, there’s still time!).

We’re always looking to cover the latest trends in sports business. Recognizing the rise of eSports, this year we’ll be adding programming on eSports, including an eSports Sunday Workshop and a few breakout sessions covering eSports topics. Since we’ll be covering eSports in this year’s NSF, we thought it would be fitting to re-share a story on the Sacramento Kings and their Tech Night. The Kings’ Tech Night featured innovative activations, as well as integrated an eSports demonstration into the game and showed off Golden 1 Center’s capabilities as an eSports venue.

“The Sacramento Kings’ Tech Night highlights the path tech innovation is headed in the sports industry, particularly when it comes to building strong sponsorships. Their use of experiential marketing combined with technology is what makes this program so compelling and engaging for fans and sponsors alike.”

The Sacramento Kings have always been at the forefront of leading innovation and feel that innovation is ingrained in their team identity. They are constantly using technology to redefine the fan experience and their fans have developed a sense of pride around the team’s use of innovative technology. To continue to foster that pride in the community and to showcase their new Golden 1 Center, the Kings put on Tech Night for their game against the Milwaukee Bucks. The Kings’ Tech Night featured an eSports demonstration at halftime and gave some of their partners the opportunity to show off their cutting-edge technology. Tech Night also featured the activation of the Kings’ own Capitalize contest, the NBA’s first venture capital showcase for startups.

This is the second year in a row the Kings have hosted Tech Night, however, the opening of the Golden 1 Center made the perfect opportunity to grow the event and show off the technologies in the new arena. One of the main highlights of Tech Night was the Kings’ Capitalize startup contest. The Capitalize contest is a startup contest for local innovators that focuses on the Kings’ commitment to draw attention to the Sacramento region and to use sport as an agent for good. Earlier this year, the Kings announced the contest and collected over 100 applications from local innovators. The field was narrowed down to three startups to be featured at Tech Night: EicOsis Human Health, Text to Ticket Inc., and Trifecta, Inc. All three startups made a short video pitch that was put out on social media for fans to choose the winner. These pitch videos were also shown during Tech Night and the Trifecta, Inc. was crowned as the winner of the $10,000 prize.

Tech Night also featured a Super Smash Bros. eSports demonstration during halftime. With eSports growing in popularity, the Kings used Tech Night as an opportunity to expose more fans to eSports and show off their VSP Skeye View video board, the NBA’s only 4K Ultra HD videoboard. The Kings hosted a world-ranked Super Smash Bros. player in a battle against a local player who won a regional tournament. While the eSports match was fun for the fans, it also gave the Kings opportunity to show fans and eSports leagues what a great venue the Golden 1 Center would be for hosting future eSports events. 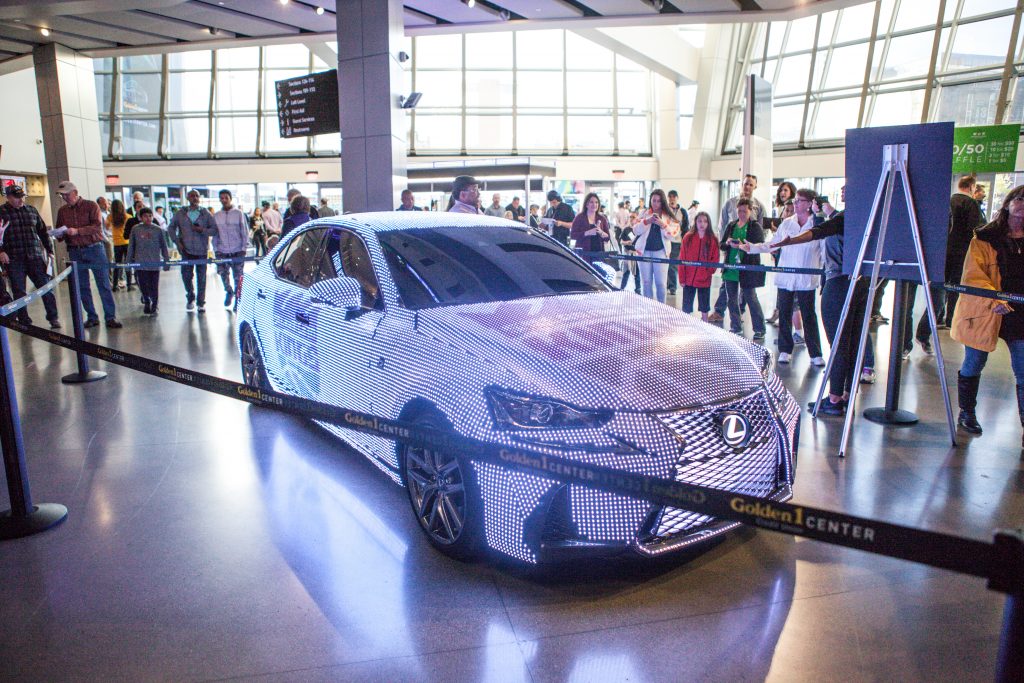 Tech Night gave some of the Kings partners the unique opportunity to display their new and innovative technologies. Lexus, one of the Kings’ corporate partners, showed off their new Lexus LIT IS with a grand entrance at the game. The Lexus LIT IS is a custom car wrapped in over 41,000 LED lights and that has the capability to display dynamic designs and graphics, as well as respond to movement and music.

Among many things, Tech Night resulted in a sold-out night for the Kings. The Kings were pleased to see the continued engagement from their fans through the participation in the Capitalize contest on social media. Kings’ fans also expressed positive feedback on the team’s efforts to highlight the Sacramento community and an increase in pride in the team’s technological advances.

The Kings plan to hold another Tech Night next season and look to continue to grow the program. Tech Night has exposed the Kings to many innovative companies that have benefitted the Kings organization. For example, two of last year’s Capitalize contest finalists have since become Kings affiliates.