Posted on November 28, 2018 by National Sports Forum | Selling It | SUBSCRIBE

PENN STATE BASKETBALL CLIMBS HIGHER THAN EVER BEFORE

PSU Expands on an Already Existing Campaign to Give back to the Community, while also Driving Ticket Sales for the new Season 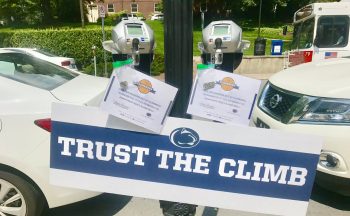 I can’t believe November is already over! These past couple of weeks seem to have flown by with all of the holiday busyness that accompanies this season. I am hoping you all had a great Thanksgiving and got to spend quality time with the people that mean the most to you. Since heading back into the office, I have been intentionally taking time to pause and reflect on the experiences shared with my family last week and the gratitude that I have for them.

Reminiscing on these joyful moments inspires me to spread this positive feeling to those around me; after all, nothing feels better than making someone else happy! Penn State University Men’s Basketball team would agree with this sentiment. These past few months, the team has embraced their opportunity to give and have “paid-it-forward” by performing random acts of kindness on individuals in their community. This is the perfect story to highlight the spirit of this season! Hope you enjoy the read!

“Penn State Basketball has taken fan appreciation to a place it has never gone before. By engaging the fans and entire community, the team is showing why we should all ‘climb’ with them!” Visit www.sportsdigita.com to learn more about Sportsdigita.

Penn State Basketball has taken 3 simple words and created a mantra for athletes, fans, and the community to live by. A year and a half ago, the men’s basketball team invited their fans to “Climb With Us”. In fact, The (student section) Legion of Blue, climbed Mount Nittany with Head Basketball Coach, Patrick Chambers to show their buy-in. Climb has become an essential part of the language surrounding the team and everywhere Penn State Basketball is – climbing is somehow incorporated.

This season, Marketing Manager PJ Mullen has been able to take this slogan to new heights by finding inspiration everywhere around him. While at a car wash one day, a man walked up to a co-worker and randomly handed them a $100 bill. His reasoning? That was the anniversary of his brother’s death so every year he liked to do something nice in his honor. This random act of kindness excited PJ and immediately got his creative wheels turning and when he ran into Coach Chambers after his encounter he pitched him his new ingenious idea – “Random Acts of Climbness”. Coach Chambers loved it, and the initiative was born. While the marketing team implementing the program wanted to do things that would get people talking about men’s basketball, they were primarily focused on doing things that would make people happy and were completely random.

“Random Acts of Climbness” has been a fun program to be a part of and follow because there is so much creativity and freedom built into it. The acts performed by the team always meet two requirements. First, they have to make people smile, and second, they have to be completely random. Most of the acts are so random that recipients are left wondering what it had to do with basketball. This was the main goal PJ had as he was designing the program, he just wanted to make people happy. Over the course of the last few months, the team has already performed multiple random acts that left fans feeling appreciated, happy, and enthusiastic about the season.

The team paid for parking meters in the downtown area, helped out a local Weis Markets by taking groceries out and loading them into cars for elderly shoppers, and Coach Chambers spent a morning serving people their morning coffee, on the house, at Dunkin’ Donuts. They have also carried out activities like delivering snow cones to students on a hot day, leaving car wash certificates on parked cars, and buying people lunch. Most recently they surprised a young fan at school by bringing the entire team in to class for a pizza party. Normally alongside a random act is a note from Penn State Basketball and Coach Chambers with the hashtag #ClimbWithUs written on it. As people have been posting the random act they received on social media, they often an include an image and #ClimbWithUs in the message. Now even if people didn’t personally reap the rewards of the act, they can follow along on social media with the hashtag and see what Penn State has done for fans now.

The team started the program with no initial partners, as everything was truly random. Once the initiative took off, the sports properties group wanted to know how they could get involved. From then on, partners have been utilized and brought on as random acts are thought of. One example is when they partnered with Dunkin’ Donuts to provide coffee to people before work. However, no matter who they partner with, Penn State Basketball always picks up the bill. Since “Random Acts of Climbness” is truly about doing something good for the community no act is commercialized or used just to get money, just to get a smile. 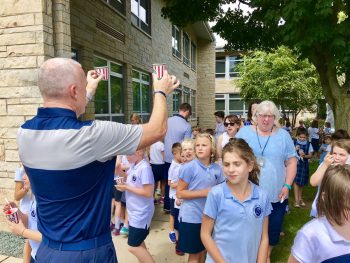 The basketball program has seen tremendous success with this program. Although the initial drive behind “Random Acts of Climbness” wasn’t to sell tickets, that’s exactly what it has done. Student ticket sales have increased dramatically from last season, regular ticket sales have increased, and group ticket sales are on track to meet and exceed last year’s numbers. PJ was adamant that part of this increase has come from the team’s success and that as a marketing department they have simply “capitalized on how well the team is doing”. But whether the team has driven ticket sales or “Random Acts of Climbness” has motivated the community to come out and support, the Bryce Jordan Center is going to be very full this season.

Beyond sales, the team has achieved a huge positive response from the community. PJ recalls seeing a community member getting the gift certificate off her car and crying because she was so happy. One unexpected response has been fans deciding to pay it forward by doing something nice for someone else. This has helped accomplish the overall goal of the program, which was to make people happy and get people to do nice things for each other, even acts as simple as holding a door open.

“Random Acts of Climbness” was intended to be a short initiative, lasting only from mid-summer to the end of season ticket sales on November 7th, however it looks like the program will continue well into the coming season. As PJ described it, the program has “taken on a life of its own”. Fans have loved the new and exciting things the team has been able to pull off, almost as much as PJ, Coach Chambers, and the team have enjoyed putting them on.

To see some of the “Random Acts of Climbness” you can check out these links: