Posted on October 11, 2017 by National Sports Forum | Selling It | SUBSCRIBE 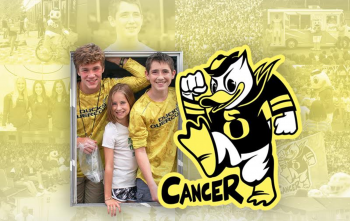 Dear Faithful Readers,
One of my favorite things about the Fall is that it kicks off College Football Season. I think we all can agree that cheering on our Alma mater or favorite powerhouse (or underdog) team is a lot of fun. Whether fans are watching live from the stadium, at a bar, or at home, college football can really bring a community together with a sense of school pride.

This week’s Selling It… is about the University of Oregon Athletic Department and how they used their football program to rally their community to support a great cause. The Athletic Department worked with Nike and the local children’s hospital to create an unforgettable experience for some of the patients while raising funds and awareness for childhood cancer at one of their football games.

University of Oregon Football has built up quite the reputation in recent years of wearing sleek and stylish uniforms, never failing to create a buzz on social media. But the uniforms that they unveiled for a home game against Nebraska on September 9th carried an extraordinary significance. In an effort to connect with the Children’s Hospital and raise awareness for pediatric cancer, Oregon leveraged the popularity of their uniforms and the pre-existing partnership between Nike and the OHSU Doernbecher Children’s Hospital in Portland to provide young patients with an opportunity to design their gameday uniforms, sideline apparel, and fan gear.

A partnership between Nike and the OHSU Doernbecher Children’s Hospital has existed since 2004 through the Doernbecher Freestyle Project, a program that allows cancer patients at the Children’s Hospital to collaborate with Nike designers to create a shoe with colors, styles, and materials unique to their personalities. With Nike already serving as the official apparel provider for University of Oregon, the Ducks saw an opportunity to work with Nike and the Children’s Hospital on a custom jersey that would help bring awareness to childhood cancer. Since the uniforms worn on gameday are decided over a year in advance, this idea had been in the works for some time now, with development starting at the end of the 2015 college football season.

The University of Oregon selected a committee of coaching staff and three student-athletes to team up with Nike and the Children’s Hospital for this initiative. In the 18 months leading up to the big reveal, the design team, which included three pediatric cancer survivors, worked to create the perfect uniform that captured the usual flare of the Oregon Football uniforms and generated an awareness for pediatric cancer. After months of creative collaboration, the team was ready to debut the special uniforms that would make the artistic vision of these children become a reality.

Looking ahead at their schedule for the upcoming 2017 season, the University of Oregon was intent on debuting their custom jerseys during the month of September, being it serves as Childhood Cancer Awareness Month. Noting that the September 9th home game against Big 10 Conference powerhouse, Nebraska, was sure to draw national attention, Oregon’s Athletics Department decided that this date was perfect for revealing the uniforms. The custom attire featured a prevalence of yellow colors to pay tribute to Childhood Cancer Awareness Month, a patch on the shoulder with the Oregon Ducks mascot stomping on the word “cancer” (a reference to the title of the initiative), and a message that ran down the pants leg of the jersey that read: “Win the Day. Win the Fight.” With millions of fans cheering them on, including the three young patients who helped design the uniforms, Oregon went on to win the game, 42-35. 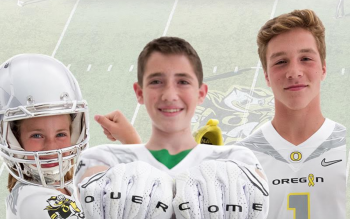 Oregon Football teamed up with Nike and the OHSU Doernbecher Children’s Hospital in Portland to design the special uniform. The children also designed other sideline and fan gear including T-shirts, jackets, and hats, to be sold to raise funds for pediatric cancer research.

The initiative proved to be a tremendous success for the University of Oregon. On gameday, they sold $50,000 in gear at the stadium in the first hour. At a private donor event hosted by the university, an additional $18,900 was raised. The grand total raised by the initiative was upwards of one million dollars. Their social media impressions over the weekend were off the charts, with 17 million impressions coming on Facebook, 7 million on Twitter, and 3 million on Instagram. As a whole, the impressions were twice as many as any other charity promotion of its kind for the university, yet another testament to the team’s success in bringing awareness to such an important cause.

While the uniforms for the rest of the season, as well as the 2018 season, have already been decided upon, Oregon has not ruled out the possibility of bringing the “Stomp Out Cancer” campaign back in future years. But with other schools already contacting Oregon about implementing a similar initiative in their own programs, the University of Oregon has succeeded in setting a trend and inspiring other schools to get involved in spreading awareness for noble causes like this one.