Posted on April 12, 2017 by National Sports Forum | Selling It | SUBSCRIBE

Dear Faithful Readers,
Every kid has dreamed of being a super hero at some point in their lives. Growing up, a majority of us 90’s kids enjoyed watching Power Rangers, which was an entertaining show for the millennial generation. Today, it is very important to connect with the millennial generation, which is evident with the resurgence of shows from their childhood into movies, such as Power Rangers.

“Bringing communities together is something which makes the sports industry incredibly special and unique from other industries. The example shared today by the 87ers is exactly the type of experiential marketing experience fans today are craving. Not only did this program bring together the community, but it brought together multiple sponsors in support of a great fundraising event.”

This season the Delaware 87ers aimed to host a plethora of theme nights to benefit local nonprofit organizations and help give back to the community. The team’s front office found that the popularity of the theme itself helps increase attendance and public awareness drastically. For one of the team’s home contests in March, the Sevens set a goal of raising money and awareness for the March of Dimes, a nonprofit organization that works to improve the health of women and newborn babies and generate awareness for premature births in Delaware. With the Power Rangers movie hitting the big screen just a week after the game, it seemed like the perfect opportunity to relive every 90’s kid’s dreams and have a Power Rangers theme night, including customized jerseys featuring the Pink Power Ranger’s iconic design.

On Friday, March 17, the Delaware 87ers hit the court to play the Salt Lake City Stars and marked the first theme night partnership between Nickelodeon and a team in the NBA Development League. Being a team in the D-League gives the Delaware 87ers the freedom to think outside the box when trying to gain their fan’s attention. This past winter, the team partnered with Lucasfilm to host a Star Wars night and sported R2-D2 jerseys to support Nemours/Alfred I. duPont Hospital for Children and found great success. With the recent resurgence of the Power Rangers in popular culture, the Sevens decided to leverage the opportunity and reach out to Nickelodeon to partner up for an important cause.

When deciding which color and design to use for the uniforms, the Sevens wanted a product that would spark good questions. For example, why did they decide on a pink uniform? – After conducting some research, the 87ers marketing team found that the Pink Power Ranger is among the most popular and memorable of the original squad and the color pink also represents one of the March of Dimes’ colors (along with purple). The uniforms mirrored the original Power Rangers design and iconic lightning bolt symbol across the front of the jersey. It was important to the 87ers to tie all the little details together in order to maximize popularity of the jersey and subsequently raise as much awareness for March of Dimes as possible.

The first 2,000 fans in attendance at the game received a commemorative Nickelodeon Night featuring Power Rangers poster. Additionally, thematic in-arena music, trivia questions, face painting, and magic shows were played throughout the evening. As an added bonus, the Pink Power Ranger costumed character was in attendance greeting fans and taking pictures. The game-worn, autographed jerseys were auctioned after the game and all proceeds were donated to March of Dimes. 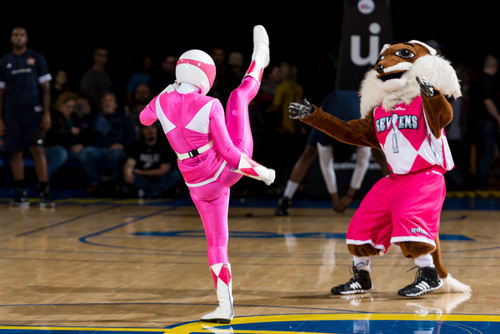 In addition to partnering with Nickelodeon, the game featured a unique activation courtesy of Corrigan Sports Enterprises (CSE) and the Delaware Running Festival.

CSE is a well-known organization that hosts various running festivals throughout the United States. During the basketball game, CSE featured an “Awareness Run” courtside where a seasoned runner ran on a treadmill throughout the game. She was challenged to complete a half-marathon prior to the end of the game. If completed successfully, all fans in attendance would receive a voucher for a free Jimmy John’s sub and for every mile completed, CSE would make a financial contribution to March of Dimes. The runner ended up finishing the 13.2 miles with 2 minutes to spare, which made for a very happy fan-base!

Nickelodeon Night featuring Power Rangers received very positive results. It was well received by many basketball fans on social media in lead up to the event and the jersey design generated a lot of hype in both the local and national media. The Sevens are most proud that the team was able to leverage the platform to bring attention to the March of Dimes and generate donations for the organization through ticket sales, the jersey auction and contributions from Corrigan Sports Enterprises.

Next season the 87ers plan to continue hosting creative theme nights to support their local charities. After seeing such success from this past activation, Nickelodeon and the Sevens have plans to partner up for another successful activation next season.

ReplyBuy enables professional teams, universities and venues across the country to connect in real-time with their fans via mobile and execute a purchase with a quick “reply” text message. Partners can deploy targeted campaigns on-demand, generate instant sales, capture fan data and track their results in real-time. ReplyBuy bridges the gap between marketing and mobile enabled sales in a way that makes sense for every fan. Click Here to learn more!