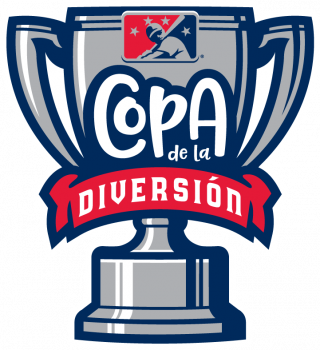 I hope your summer has been full of rest and relaxation! It is crazy to think it is already half way over! There are many different reasons why this season is my favorite time of year – vacations to look forward to, great weather to enjoy, and of course baseball season. With baseball season in full swing, I look forward to nothing more than kicking back and watching a good game!

This week we wanted to highlight what the MiLB is doing for its community both on and off the field.  The MiLB has been known for its incorporation of fans and community within its organization. Through a new initiative stemming from their “Copa De La Diversión” series, the MiLB has been a foster of change for thousands. By establishing new partnerships with the American Lupus Foundation and the ECHO Foundation, MiLB has been able to support issues across the spectrum. The expansion of the “Copa De La Diversión” series has worked to create a sense of unity and team spirit not often seen before! Hope you enjoy the read!

In October 2018, we wrote a story highlighting Minor League Baseball’s (MiLB) new multicultural fan engagement initiative, “Copa de la Diversión” (“Copa”). This initiative’s focus is to intentionally and authentically engage and connect with the Hispanic fanbase via culturally-relevant content. MiLB continues to put its fans at the center of its initiatives, working to create new programs that engage its diverse communities. Because of the continued success of the Copa de la Diversión program, MiLB has expanded its reach even further. Its two main pillars for continued growth – community and storytelling – have created a solid foundation for the organization moving forward. These core values are consistently portrayed through the organization’s work and commitment to its fans and communities. With new initiatives in development, MiLB has shown is more than baseball and remains committed to providing an inclusive experience for its millions of fans. Minor League Baseball’s commitment and dedication to its community is what makes the organization one of the leading forces in sports.

To continue developing fan relationships and growing Copa, MiLB has several programs aimed at engaging both teams and their communities.

“As part of the continued evolution of Copa, content and storytelling remains a fixture in that development,” said Cory Bernstine, assistant director, marketing strategy & research, Minor League Baseball, “We have so many incredible stories, in which we continually seek out new and innovative ways to share those stories.”

One of these extensions included the recent alignment with La Vida Baseball, the nation’s leading English-speaking Latino baseball digital media company. The platform is placing a spotlight on Copa via in-depth stories about the initiative, including a new bi-weekly show that has shown early signs of success. The company’s streamed show works to create a connection between the teams’ successes and the fans they represent. In addition, Copa de la Diversión yielded the “Copa Identity Tournament” earlier this month, an online promotion that gave fans a vote on their favorite Copa identity.

In March, the Fresno Grizzlies unveiled their Copa identity, Lowriders de Fresno. The name pays homage to Fresno’s Latino community, as the colorful paint jobs serve as vehicles to display artistic tributes to the Mexican history and culture in the region. As part of its efforts, the team recently hosted a community-wide car show at its ballpark, and the winning lowrider will be featured as part of Fresno’s Copa logo for 2020, giving fans an influence over the team’s brand.

While each aspect of the program has been unique, MiLB’s goals have remained the same. Engaging its community, creating strong partnerships and telling success stories from across the 160 teams make MiLB the distinctive organization it is. 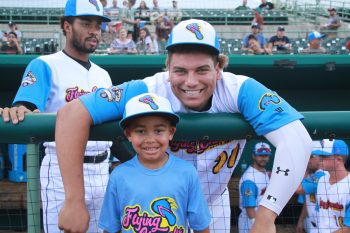 Minor League Baseball remains committed to aligning with strategic partners that buy into MiLB’s growth. One of which, ECHO Outdoor Power Equipment, became the first commercial partner of the Hispanic fan engagement campaign. One of the partnership extensions included creating “MiLB Project: Refresh” powered by ECHO Outdoor Power Equipment. The goal of “MiLB: Project Refresh” was to go into 15 local communities across the country and refurbish their baseball and softball fields. Through the partnership, both organizations had objectives that aligned with making a difference in the community.

Additionally, MiLB announced a partnership with the Lupus Foundation of America (LFA) to become an Official Charity Partner of Copa de la Diversión, making it the first-ever philanthropic partner tied specifically to MiLB’s Hispanic fan engagement initiative. Having a large percentage of Hispanic fans, Minor League Baseball wanted to raise awareness and education for a cause that connected with that segment of the fan base.

While these new initiatives are still in their early stages, immense success would come as no surprise following the response to Copa de la Diversión thus far. MiLB is closely measuring each unique initiative and its immediate and long-term impact. When it comes to partnerships, positive advances have been made both in the baseball community as well as in promoting lupus awareness. With that said, programs targeting specific issues in these communities are expected to see productive results later this year.

Minor League Baseball continues to go to market and identify strategic partnerships for the initiative, which Cory Bernstine, assistant director of marketing strategy & research for MiLB, knows it will create new opportunities for community impact and awareness. The organization will continue to follow the two pillars that lay the foundation for its identity: community and storytelling.

The National Sports Forum is the largest annual cross-gathering of the top team sports marketing, sales, promotions, and event entertainment executives from throughout the broad spectrum of teams and leagues in North America. The 2020 National Sports Forum will be held on Feb 9-11, 2020 in Atlanta, GA. Visit www.sports-forum.com for more information.

We are a company of go-getters dedicated to making beers that we hope people love. We proudly brew more than 100 brands in the U.S., and with the help of our flagship brands, Budweiser and Bud Light, we hold a 45.8 percent share of the beer market. We put our heart and soul into making the best beers that our consumers enjoy during the most memorable moments. Quality moments shared sipping our beers, shouting cheers and raising toasts. Each is a nod to the huge team effort that goes into brewing, packaging, marketing, transporting and selling our beers.