Posted on February 21, 2018 by National Sports Forum | Selling It | SUBSCRIBE 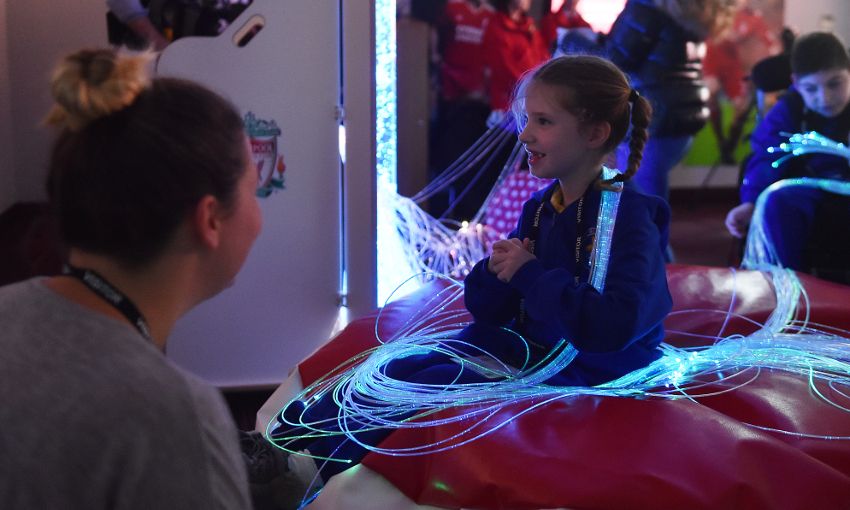 This week we wanted to bring you a story about a team that added a space to their stadium to accommodate fans with sensory disabilities. Liverpool FC worked with Autism Together to create a sensory room in their stadium to make the gameday experience more safe and enjoyable for fans with autism.

Any sports fan would agree that attending a home game for your favorite team is one of the most electrifying feelings and a match at Anfield, home of Liverpool FC, is certainly no exception. As one of the top teams in the Premier League, Liverpool FC embraces fans chanting and screaming for their favorite players just as any other team would. But as a club that prides itself on equality, diversity, and inclusion, the team wanted to ensure that as many fans as possible were able to experience the excitement of Anfield on match day. Recognizing the benefits of having a sensory room, the team with the financial support of the Premier League and BT created a similar facility at their home stadium, effectively opening its doors to a broader range of fans who could benefit from a quieter space to enjoy the game.

Liverpool FC has been dedicated to its organizational efforts to present and promote an environment of equality and inclusion for all of its fans. Back in 2015, Peter and Kate Shippey petitioned a local football club, Southerland AFC, to provide a space for fans with autism like their son Nathan to watch their heroes on the field from a safe and suitable environment. Since the noisy atmosphere of the game can certainly be overwhelming for fans with sensory disabilities, the team granted the family’s request and built a sensory room at their home stadium. The family then established the Shippey Campaign to remain active in working to create similar facilities at other clubs and building awareness for the necessity of such a space.

LFC wanted to develop the new feature and in order to ensure that the needs of its autistic fans were being met, they worked closely with a local charity, Autism Together, to make sure that the features of its facility met the standards that its fans needed to feel comfortable in the space. Through this collaborative effort with the charity and funding from BT Sport and the Premier League, the team was able to purchase a range of sensory equipment that perfectly catered to its fans’ needs, including a sensory portable bubble tube and light unit, fiber optic carpeting, LED bean bags, and a projector to watch the game. The sound-proof room, which can accommodate up to four fans and four carers at a time, provided an ideal environment to enjoy the game without being overwhelmed by excessive noise.

The club partnered with Autism Together, a local charity that works to provide the necessary resources and support to individuals with autism and their families, to develop the features of its new facility at Anfield.

Since its debut at their November 18th home game versus Southampton, the sensory room has been very positively received by its fans, with a number of people reaching out to the organization to applaud its efforts towards creating an all-inclusive environment for all fans to experience. Simon Thornton, Diversity and Inclusion Officer for Liverpool FC, expressed his pleasure with the newest addition to the stadium: “We are committed to being as inclusive and accessible as possible and we believe that this new facility will provide more of our fans with the opportunity to experience watching a live game at Anfield.”

While the new sensory room will be available on a trial basis at a number of games for the remainder of the 2017-2018 season, the club is looking forward to providing more fans with a calm and comfortable environment to enjoy match days. More importantly, however, LFC hopes that its efforts can inspire other teams to do the same. Yvonne Crowhurst, head of Autism Together’s Autism Training and Advisory Service, expressed her appreciation for the team’s dedication to a noble cause: “It really means something when the big names show they’re listening to the autism community. I’m sure the box will be visited over the years by many people who never thought they’d be able to come to a match. We hope other clubs around the country will follow Liverpool FC’s lead.”

Budweiser is back for their 17th year with the NSF as they are the Official Sponsor of the “Budweiser Gala” that will take place on the evening of Tuesday, February 12, 2019. Anheuser-Busch, Inc., a diversified corporation, is the world’s largest brewer with 12 domestic breweries and distribution in more than 80 countries.
Click Here to learn more!